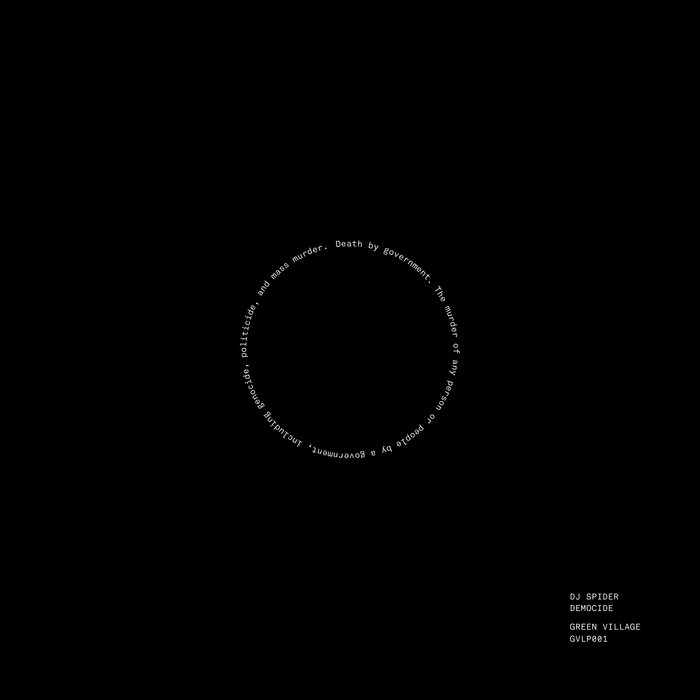 Respected techno figurehead DJ Spider drops 'Democide' - his first album on a label other than his own – via illustrious New Jersey-based event series and art collective Green Village.

Also from New Jersey, DJ Spider has long been one of the most respected figures based out of the East Coast's electronic music scene. Co-founder of Plan B Recordings, Sublevel Sounds and founder of BTU Music, Spider has released four albums and over 40 EPs. He has fomented a distinct techno sound, one where sludgy synths and a sense of urban dystopia make for unsettling atmospheres; with elements of industrial, ambient and a masterful way of drawing tension and darkness out of his synths, he has one of the most unique sounds in techno. This new album proves that once more across twelve spellbinding
tracks.

Things kick off in haunting fashion, with withering synths over bouncing drums taking you deep into Spider's paranoid world on the excellent 'Kill Your TV'. From there he explores super slow motion techno on 'Warhead', bristling and militant drum work on 'War Is A Racket' and then offers some melodic, light-fuelled optimism on the scintillating ‘Enemy of the State.’

The brilliantly loose drums on ‘Repeat Offender’ dip into late night hip hop territory, ‘1984’ is an assault on the dance floor, ‘The Vector Symbology’ shows off Spider’s knack for warping, bending and smearing synths in ways only he can and ‘Necro Nebula’ is a high pressure brew of restless drums, rumbling bass and the sounds of machines in meltdown before closing on ‘Stagecraft Psychosis’ which is the sound of the future collapsing in on itself.

This is a superbly cinematic album of storytelling techno that is filled with evocative mental imagery as well
as moments that will detonate the dance floor, not to mention plenty of rewarding headphone moments.